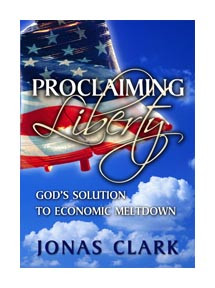 The King's Release is your biblical solution from the life-crushing power of debt slavery.

Scripture teaches the anointing frees you from debt slavery. The Hebrew word for liberty means "freedom from debt bondages and financial slavery."
Biblical evidence reveals a pattern of kings proclaiming liberty from debts to their citizens. This was known historically as the "Kings Release" as noted by international financial economist and biblical historian Dr. Michael Hudson.

Moses also spoke of debt release saying, "Proclaim liberty throughout all the land unto all the inhabitants thereof... you shall return every man unto his possession." Isaiah confirmed writing, "The Spirit of the Lord is upon me because he has anointed me to proclaim liberty to the captives."

Jesus reasserted debt freedom decreeing, "The Spirit of the Lord is upon me because he hath anointed me to set at liberty them that are bruised, crushed by debt bondages."
Debt has the power to crush hopes, dreams, and everything you worked for, but there is an answer, the Kings Release.