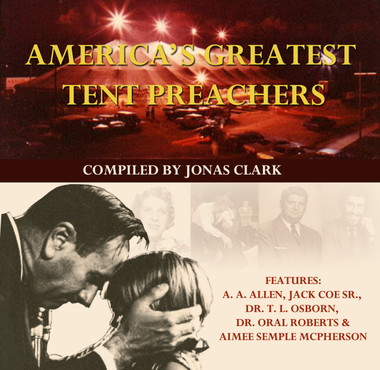 Aimee Semple McPherson was the glamorous and flamboyant founder of the Foursquare Church and the nation's first Christian radio station. Listen to her minister to people that don't think they need to be ready to enter into heaven. Her sermons were some of the greatest among the tent preachers first to incorporate the contemporary communications of that day into her preaching of the Gospel. From Angelus Temple she performed an extensive social ministry, providing hot meals for more than 1.5 million people during the Great Depression. Her presentations of the Gospel are unique among all the healing evangelist.

Jack Coe was known as the "Man Of Great Faith." Even after being jailed in Miami in 1956 for practicing medicine without a license, he was more diligent than ever to preach the Gospel with fervent boldness. The ministry's tent would seat over 22,000 people. Can you imagine how many metal folding chairs that must have been? In this tent meeting, Coe challenges people to believe God to heal every disease, even the "hard ones." During his preaching, Coe would stir people up with his pointed and very direct way of addressing everyday problems. If there was one common theme in the preaching of Jack Coe it was ‘hope for those that had none.’ His faith building sermons deeply touched those who were desperate and at the end of their ropes. They walked out of his meetings full of faith for tomorrow.

In 1947 Oral Roberts resigned his pastorate to enter an evangelistic ministry to pray for the "healing of the whole man." Since then he has conducted more than 300 evangelistic and healing crusades on six continents and has appeared as a guest speaker for hundreds of national and international meetings and conventions. A pioneer in tent evangelism, Dr. Oral Roberts was a forerunner of unity and reconciliation in the body of Christ during a time when society was calling for segregation. His sermon "The Fourth Man" is a classic for every serious student of Pentecostal history. Oral Roberts is one of the greatest Gospel evangelists of all times!

T. L. Osborn was the first missionary evangelist to hold meetings in open fields and parks in non-Christian nations, to proclaim Christ and pray for miracles as proof that Jesus is alive. Today open air meetings have become standard procedure. Evangelist T. L. Osborn has heralded the Gospel to some of the largest crowds in the world. You will be lifted to a greater understanding of the healing ministry after listening to this classic message. We recommend that you let anyone who is sick listen to this message.

Preaching: FUNDAMENTALS FOR HEALING THE SICK

A. A. Allen was one of the most important healing revivalists during the Voice of Healing days. He was known as "The Miracle Man." His television commercials professed, “See! Hear! Actual miracles happening before your eyes! Cancer, tumors, goiters disappear! Crutches, braces, wheelchairs, stretchers discarded! Crossed eyes straightened! Caught by the camera as they occurred in the healing line before thousands of witnesses.” To be sure, Allen was one of the most heralded evangelists in the Voice of Healing movement. Listen to him minister to thousands gathered under his massive tent in the 1960's. Many modern Pentecostals understand about blessings, Allen lets you know about curses too.